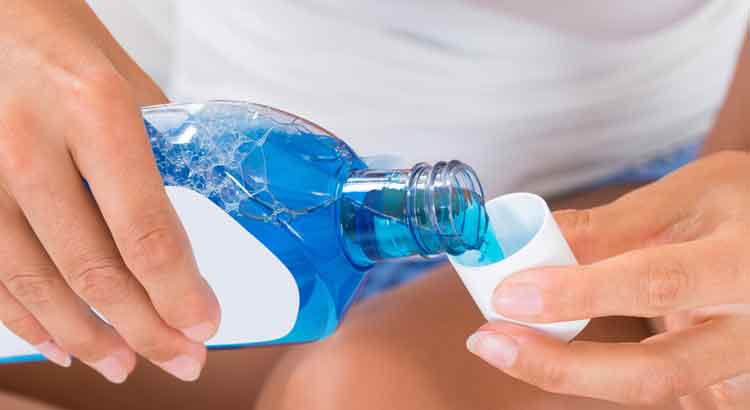 Chlorhexidine mouthwash is a therapeutic oral rinse containing chlorhexidine gluconate in different percentages (0.05% to 0.3%). It can decrease the amount of bad bacteria in your mouth, helping to improve gingivitis symptoms such as swelling and redness of gums and the soft tissue bleeding. As all medication, mouthwash with chlorhexidine has side effects and drugs interactions with other drugs that you should know in advance in order to avoid unwanted results.

Chlorhexidine eliminates pathogenic bacteria more effectively than other substances such as triclosan (indicated as potentially harmful by different sources) that’s why it is useful to improve gengivitis symptoms, to treat gum boil (medical term: gum abscess) and tooth infection.

It can permeate soft tissues and stay there long (about 8-12 hours). In this time period, chlorhexidine is slowly released into the oral cavity causing the antibacterial action to be prolonged throughout the day. In other words, bacteria killing is not only performed during rinsing but it lasts for many hours.

Lasting long, the bactericidal action of chlorhexidine becomes bacteriostatic; it contributes to the maintenance of the correct balance of the bacterial flora that lives in our mouth, avoiding  pathogenic microbes from taking over.

Even people who have dental implants may benefits from using this antibacterial oral rinse because it doesn’t allow plaque to accumalte around the implant surface. We should remember that plaque and tartar are the first cause of peri-implantitis which leads to implant fail.

We all know that medicines have downside effects but we also know that each person react in different way and this is a fact for chlorhexidine as well. Down below are some of the side effects that are known to be associated with chlorhexidine mouthwash. Just because a side effect is listed here doesn’t mean that all people using this medicine will experience that or any side effect.

The most important side effect of Chlorhexidine is that it can change the color of the teeth that tend to become darker: They go from natural white to yellow, brown and black depending on the amount of chlorhexidine used and the time you kept it into your mouth.

The teeth pigmentation is one of chlorhexidine side effects or, better, it is the result of incorrect use of the product. It may happen because of three different reasons:

Is that side effect permanent ? Fortunately no ! Your dentist can easily brush away that unaesthetic color with his/her professional tools and abrasive paste after the treatment is over.

Should I know about additional unpleasant side effects ?

Yes, here are some of theme:

What to do in case of allergy or side effects ?

If the mouthwash causes you swelling, throat burns or soreness in your mouth, stop to use it let your doctor or dentist know about that. In case of severe breathing difficulties call your doctor or 911 immediately (USA only) before an anaphylactic shock occurs.

Drugstores and online stores have several types of chlorhexidine gluconate rinse (Peridex, Periogard) to choose from. They are produced by different brands but, apart from the brand, therapeutic mouthwashes differ in the amount or percentage of chlorhexidine they contain.

As more the concentration increases as more chlorhexidine side effects you may experience if do not follow your dentist indications.

While we are writing this article there are a few brands only that are producing and selling mouthwashes with so high chlorhexidine concentration. If you are going to use this therapeutic oral rinse, you shouldn’t keep the mouthwash in your mouth more than 15 seconds otherwise you may experience the chlorhexidine side effects (it might stain your teeth).

First of all you should keep in mind that therapeutic rinse are not cosmetic products; you need the dentist or doctor prescription to buy them. Second, it’s important to follow your doctor directions and read the instructions on the product label.

Here are the common sense rules to use therapeutic oral rinse:

Chlorhexidine interacts with other medicines, biological substances or particular environment conditions such as temperature and sun light.  Let’s see the most known of them:

Interactions with blood and pus

Chlorhexidine interacts with blood and pus. If you suffer because of gingivitis you may also suffer due to gum bleeding. In this condition it not rare that pus forms between the soft tissue and the tooth enamel. Blood and pus decrease the chlorhexidine effect that’s why you should rinse your mouth with plain water before to use a therapeutic mouthwash with  chlorhexidine in order to wash away those biological material from your gums.

The interaction between chlorhexidine and water decreases the chlorhexidine power to kill bacteria (about -30%). This is the reason why you should avoid to wash your mouth with water after using a therapeutic oral rinse with chlorhexidine.

Some toothpastes, if not all, have, in their composition, surfactants/detergents which completely undo chlorhexidine effectiveness. That’s why dentists advise not to brush your teeth with the toothpaste immediately after using medicated mouthwash.

Can I use Chlorhexidine mouthwash during pregnancy ?

The pregnancy and subsequent breastfeeding is a very delicate time for each woman and proper precautions must be taken to preserve the health of the future mom and baby.

We also know that during gestation there are several hormonal fluctuations in the woman’s body and these involve important changes and side effects.

One of these side effects is the change of saliva (both by quantity and by viscosity). All of this causes repercussions both at dental level (increased incidence of caries) and periodontal (gingivitis, bleeding gums, etc.).

Currently there are only studies on animal (guinea pigs) whose results cannot be taken into consideration as a valid method for predicting any collateral side effects of chlorhexidine on pregnant women. Therefore, it is strongly recommended to use medicated mouthwash only if strictly necessary and under direct medical control.

As for breastfeeding, however, we know that there are substances that, if taken, are also excreted by breast milk, such as  the local dentist’s anesthesia that makes the milk taste bitter.

As for chlorhexidine, we do not know for sure whether this substance can “contaminate” the mom milk. If used, it is absolutely necessary to try to notice any kind of reaction by the baby (for example, he or she may refuse the mom breast due to the bad taste).

Can I take other medicines while using Chlorhexidine ?

Generally speaking chlorhexidine mouthwash is not known to affect other medicines but before to use it let your dentist or doctor know about all the products you are using (drugs, over the counter medicines, vitamins, herbal products and even dietary supplements).

Chlorhexidine mouthwash is an effective treatment for gum disease and gingivitis because it improves symptoms such as swelling and redness of gums and the soft tissue bleeding. As all medication, you have to follow the doctor or dentist instruction in order to avoid or minimize chlorhexidine side effects and interaction with other medicine or supplement you are already taking. Remember to let the doctor know about you overall health conditions and potential allergy to therapeutic oral rinse containing chlorhexidine gluconate.

2 thoughts on “Chlorhexidine Mouthwash and Oral Rinse: side effects, benefits and drug interactions”